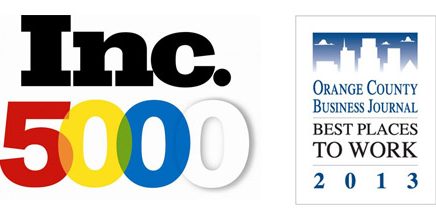 Best Company to Work For Joins an Elite Group of Fewer Than 1000 Companies on Inc. Honor Roll IRVINE, CA – August 21, 2013 – Zumasys announced today that it has been named to the Inc. 5000 List of America’s Fastest-Growing Private Companies for an unprecedented fifth time. Zumasys earned position 3617 with a three-year growth rate of 83%.

Zumasys helps companies transition their infrastructure and applications to its powerful Cloud computing platform, which utilizes the latest technologies from Cisco, NetApp, and VMware and is based in the world’s largest and most powerful data center, the SuperNAP of Las Vegas. This achievement puts the Southern California-based Cloud service provider in an exclusive group that includes Vizio, Jamba Juice, Oracle, and Zappos.com.

The Inc. 5000 list is ranked by revenue growth over a rolling three-year period, so making the Inc. 5000 year after year is exceptionally rare. As a company grows, it becomes increasingly more difficult to post large growth percentages. Fewer than 1000 companies have made the list 5 times.

Zumasys earned its 2013 spot on the list after nearly doubling its revenue between 2009 and 2012. Despite challenging economic conditions the company has appeared five times since first making the list in 2007.

Zumasys President Paul Giobbi attributes the company’s rapid growth to the company’s unique culture. “More and more companies today are turning to the Cloud to provide improved flexibility, reliability, and cost savings,” Giobbi says. “Our platform is certainly the driving force behind our growth, but the engine powering Zumasys is our amazing group of talented engineers. Our success is directly tied to our special work environment, which focuses on leveraging the strengths of our people while creating fun, purpose-filled experiences that change lives.”

Earlier this month, Zumasys was named to the Orange County Business Journal’s list of the Best Companies to Work For in Orange County for the second time. The company appeared on the OCBJ list in both 2012 and 2013.

Zumasys helps companies of every size transition their infrastructure and applications to the cloud. With Zumasys cloud services, customers can easily access the latest software and hardware technologies over the Web allowing them to focus on growing their core business instead of managing their IT infrastructure. Zumasys delivers personalized service, integrated disaster recovery and the confidence companies need to outsource the hosting all of their applications, including legacy systems. Zumasys was one of the first cloud providers to offer a VMware® vCloud® Powered hosting platform built on NetApp® storage. Zumasys is headquartered in Irvine, CA. For more information, visit www.zumasys.com.