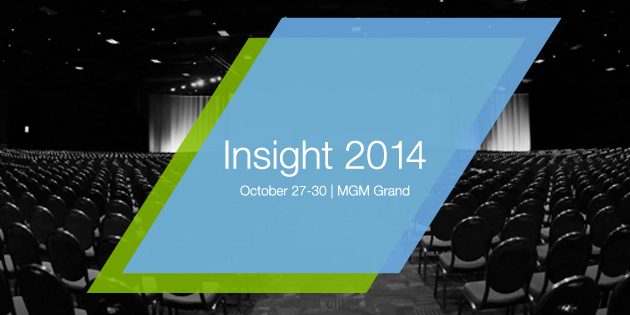 I just got back from NetApp’s Insight conference in Las Vegas, and I can say with confidence that there is a lot of cool stuff to look forward to from NetApp in the coming months. This was the first year that NetApp invited customers to the event, in addition to partners and employees, which changed the dynamic and really amped up the excitement.

NetApp had a lot of high profile announcements at this year’s Insight, including NetApp Private Storage (NPS) for SoftLayer, Data ONTAP 8.3, the “NetApp Data Fabric” for hybrid cloud infrastructures, and the acquisition of Riverbed Technologies. But there were also a lot of new features and updates that didn’t get nearly as much press. Two of those were Advanced Disk Partitioning (ADP) and MetroCluster. While the other big announcements certainly kicked up a lot of dust, these two got me the most excited because they will benefit virtually all of NetApp’s customers. From the high end to the low, everyone is going to see major improvements as a result of ADP. And the new MetroCluster features in 8.3 are going to be big game changers for people using MetroCluster for DR and business continuity.

With all the information I gained at Insight, it’s hard to condense everything into one blog. So this first blog will focus on ADP. Stay tuned for my next installment featuring MetroCluster.

Disk partitioning is a technology that has been around forever, allowing users to split up a hard drive into multiple, discrete segments to be used for different tasks. For example, if your PC has one hard drive and you have partitioned that drive, Windows will see several drives such as C:, D:, and E:. While partitions uses the same disk to store data, each partition acts as an individual drive. Another example would be your iPhone (or other mobile device). While the sticker on the box may say 16GB, when you look into your usable space within iOS, it tells you that you only have ~12GB of usable space. That’s because the disk is partitioned into storage that is used by the OS, firmware, etc. that’s separate from the storage that you can fill with other data like music, movies, and contacts.

In a nutshell, ADP is just what it says it is—an advanced level of disk partitioning. With ADP, NetApp has introduced disk-level partitioning within the storage device. Previously, proprietary information including the root aggregates would be stored on individual disks within the stack. So within a 24-disk stack, let’s say, you would typically only have 12 data disks after parity, spares, and root aggregate disks have been consumed. Now with ADP, instead of those root aggregates being stored on separate disks, they are stored onto individual partitions on those disks, which frees up a massive amount of space. For entry-level systems with 24 disks, this will roughly double the amount of usable hard drives and capacity. ADP will also give you back performance by allowing you to utilize more spindles. How’s that for getting more bang for your buck?

Let’s say you have a system right now that is set up without ADP, running ONTAP 8.2, with standard 6TB hard drives. We’ll assume that root aggregates live on 32TB of your total disk space. What NetApp has done with ADP is partitioned those hard drives to allow the root aggregate to occupy a small area of the drive rather than the entire drive itself. Now, instead of taking up the whole drive, those aggregates live on smaller portions of the drive while freeing up the rest of the disk for you to use. You’ve essentially gone from 32TB used for the root aggregate that had originally been quarantined off in 8.2 and now, with 8.3 and ADP, you’re only using about 50-75GB of capacity. That’s a huge difference. It’s why I think this is one of the most impactful technologies to come out this year that could potentially impact all NetApp customers, especially at the entry level.

An additional technology that goes hand-in-hand with SSD partitioning is “Storage Pools.” Instead of partitioning SSDs into variably sized partitions based on the size of the root aggregate, Storage Pools quarters the disk into “allocation units,” which can be shared across a user’s Flash Pools. For example, if you have both SAS and SATA drives in your stack, you can assign allocation units from your SSDs to either group, essentially sharing your SSDs between the two systems. Storage Pools help a lot with smaller stacks by allowing you to share flash resources across your system without incurring additional RAID overhead.

With the combination of ADP, SSD partitioning, and Storage Pools, customers could potentially leverage this new disk partitioning innovation across their entire stack. While ADP will only be available on the FAS2000 series (on internal disks only) for now, this technology gives those users the ability to take advantage of more NetApp efficiencies and technologies than ever before, namely, clustered Data ONTAP.

Getting more bang for your storage buck

The biggest benefit of ADP to NetApp customers is the ability to store more data on fewer hard drives. Because clustered Data ONTAP takes up so much disk space, as a rule, we at Zumasys do not run cDOT on FAS2000 systems unless there’s an external shelf. By the time cDOT is installed, customers have very little usable storage space left, so it doesn’t give our customers a very good return on investment.

With cDOT, you have to have a root aggregate for every controller in your cluster. So with a larger cluster, you might have 24 disks, and, right off the bat, 3 of those drives per controller are going to go away. So you’re down to 18 disks. But you can’t stop there, because you still need spares. Each system usually requires at least one. So there go another 2 drives. Now you have 16 drives available to use in your system. Then you’ve got the RAID overhead, so each aggregate needs 2 more parity drives, which are another 4 drives. Then you’re left with 12 drives out of a 24 disk system that you can actually put data on. It just doesn’t make sense for our customers to buy a 48TB raw system and only be able to use 24TB.

However, now with ADP on FAS2000 series storage, that reclaimed capacity can be used by cDOT while still giving customers plenty of usable disk space for their data. Previously, we knew that cDOT on a FAS2000 didn’t make sense for our customers without an external shelf. But now, with ADP, we can confidently sell cDOT to our customers even if they only have internal drives.

ADP is not only a huge capacity savings for customers. It also reclaims valuable performance. For the same dollar you paid last month running 8.2, now with 8.3, you’re going to drive more IOPS out of your stack because more disks are available to utilize. That also translates to a big cost savings on two fronts.

My guess is that, while ADP is only currently available on FAS2000 series storage, NetApp will eventually bring ADP to their other high- and mid-range systems in the future. With the massive capacity and performance improvements that ADP brings, it makes sense that NetApp would want to spread this innovation across their entire portfolio. If you’re one of those customers that won’t get ADP just yet, my advice would be to wait and see.

I think ADP is one of the biggest things to come out of Insight this year. Everyone can benefit from this. Of course the hybrid cloud, Cloud ONTAP, FlashRay, and all the other announcements are really cool, but realistically, only the big players are going to see most of the benefit from that. With ADP, everyone across the whole stack gets to leverage this innovation. It touches every client, not just a niche part of the NetApp ecosystem.

Stay tuned for the next installment in this series, NetApp Insight 2014: Two Game-Changing (and Underrated) New Technologies, Part 2, featuring MetroCluster!