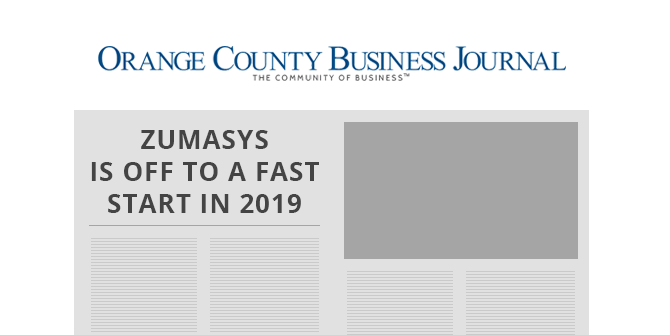 A new year, a new acquisition and a new headquarters.

Cloud services provider Zumasys Inc. is off to a fast start for 2019.

On Jan. 1, the company closed its buy of OpenQM, a database operator from U.K.-based Ladybridge Systems.

“Tens of thousands of users around the world from North America to Europe to South Africa to Japan rely on OpenQM daily to run their ERP systems,” he said.

Zumasys has been the exclusive global distributor of OpenQM since 2015.

On Jan. 17, the company held an open house at its new digs in San Clemente; a homecoming of sorts.

It got its start in the coastal OC city 18 years ago, but had been most recently based in Irvine.

Zumasys acquired the 18,000-square-foot property at 1050 Calle Amanecer in 2014 for about $2.6 million, property records show. It concluded $300,000 worth of renovations on the property in December; upgrades feature an industrial, modern design.

Zumasys had grown to about $30 million in annual sales and 100 employees, before divesting its cloud hosting, infrastructure and managed services business units in June to IT services provider NexusTek on undisclosed terms.

Zumasys, which retained its brand and software division, now employs 30. NexusTek’s local operations are based in the company’s old headquarters in the Irvine Spectrum.